A A A
Blog

My blogs for Pentecost, parts I and II, discussed God’s solutions to the problem of how to remain, first with the Hebrew people after Sinai and later, with Jesus’ disciples after the Ascension. What about us?  Beyond the beautiful candles we light at the liturgy, no divine fire appears at Pentecost to signal the presence of the Holy Spirit.  Why do we celebrate Pentecost in our time?  Is it only a commemoration, a remembrance of things past?  Can the flame of the Holy Spirit that hovered over the disciples’ heads on Pentecost transform our lives today?

At our Baptism we receive the Holy Spirit, the fiery presence of God, in our hearts in a particularly intense way.  But that is only the beginning.  As the Hebrew people’s story wasn’t over at Sinai, and Christian story was not over on Easter, our own story is a continuation of the one that God initiated at Creation, that reached its fullest expression with the resurrection of Christ, and is yet to be fully accomplished. God’s plan for the communion of all humanity and all creation with God happens one person at a time through the power of the Holy Spirit. At Pentecost, the Spirit that existed before the world began was unleashed in a new way.

Let’s return to Moses at the Burning Bush. In The Particulars of Rapture; Reflections on Exodus, (Doubleday, New York, 2001), Avivah Zornberg writes:

The Bush is aflame but it is not consumed: that is, a moment of exquisite awareness comes to him, when the fire is nurtured, “fed,” without destroying its object.  Impossibly, a radical desire is consummated without consuming or being itself extinguished.  At such a moment, transformation without death becomes imaginable. (485) [emphasis added] 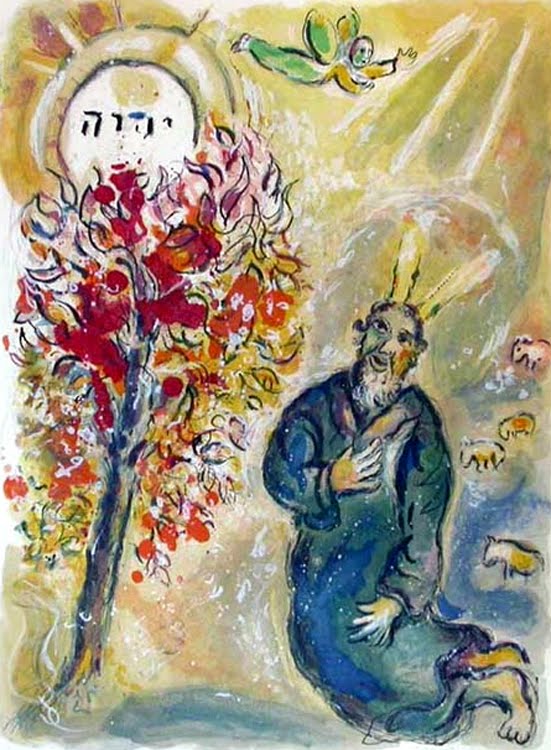 Moses and the Burning Bush by Marc Chagall

In the Bible, the prophets announce that in the time of redemption, which is our time in salvation history, the fiery presence of God will not destroy God’s people:

When you walk through fire, you shall not be scorched; through flame, it shall not burn you. For I the Lord am your God, the Holy One of Israel, your Savior. . .  . Because you are precious to Me, and honored, and I love you. (Isaiah 43:2-4, Jewish Study Bible)

In the Book of Daniel, faithful Jews, thrown into the fiery furnace because they would not worship other gods, walk in the midst of the fire and are not consumed. (Daniel 3:25) Zechariah prophesies that in the time of redemption God will be a wall of fire around Jerusalem, where God will dwell in the midst of the Hebrew people living there in joy and abundance. (Zechariah 2:8-9, 14)

Read in this light, Jesus’ words, “I came to bring fire to the earth, and how I wish it were already kindled!”, prophesy not destruction but transformation. (Luke 12:49)

Referring to God’s fiery presence in the Tabernacle/Mishkan (see Pentecost I and II), Zornberg writes that Biblical texts in which fire is a central theme signal inner development.(480) Fire ignites destruction for the purpose of renewal, a transformation of the soul.

The inner, generative flame exerts a fascination that can lead to death, to extinction. . . . “Fire is for the man who is contemplating it an example of a sudden change or development . . . [it] suggests the desire to change, to speed up the passage of time, to bring all of life to its conclusion, to its hereafter . . . The fascinated individual hears the call of the funeral pyre.  For him destruction is more than a change, it is a renewal.” (483-4)

We might think of death, either the cessation of life or the smaller deaths that occur in life, as something to avoid at all costs.  Nevertheless, at a deeper, more or less conscious level, the fire of the Spirit burning within might kindle a radical desire to die to one way of life in order to rise again to new life in Christ. Could Jesus have been describing this phenomenon when he says, in all four gospels: “Those who want to save their life will lose it, and those who lose their life for my sake will find it.”?  (see Matthew 10:39, 16:25; see also Mark 8:35; Luke 9:24, 17:33; John 12:25)

Zornberg writes of the “primal reverie” of fire that unites:

the instinct for living and instinct for dying. . . . the ‘heart of flame’ in the Burning Bush is a dream of a burning fire that does not consume: a reverie out of the very heart of fire, the inward place of transformation. The heart/flame (Labath/lehava) arises in [Moses’] reverie, ‘in order to hearten him’ (le-labvo), so that when he comes to Sinai and sees these fires he will not be afraid. (484)

The fires at the Burning Bush and at Sinai signified to Moses that he was called by God, and they heartened him for the difficult journey ahead. The fires of Pentecost gave the frightened disciples certainty that they were called by God, and courage to leave their locked room to preach the gospel to all nations. Perhaps it was at Pentecost that the disciples first became awakened to the possibility of resurrection within life.

What about us?  How do the fires of Pentecost affect our lives? In Resurrection; Release from Oppression, (Paulist Press, Mahwah, NJ, 1985), Morton Kelsey writes that transformation in the love of Christ does not happen suddenly, once and for all:

Following the way of resurrected Love is not always easy or pleasant.  We sometimes have to change the basic pattern of our lives. . . . True maturity is a process, a voyage and not a harbor, a never-ending growth toward wholeness and integration in Christ. (176-7)

For Jesus’ disciples, the resurrection was not an end, but a beginning.  Until Pentecost, the reality of resurrected life beyond Jesus’ rising from the dead was unimaginable.  The tongues of fire that rested above their heads signified a process ignited by the Holy Spirit within them, transforming and empowering them to act as collaborators with God to create God’s kingdom on earth as it is in heaven; and a sign that their work would bear fruit.  As Moses saw the Bush fulfilling God’s mission without being consumed, as the disciples saw the tongues of fire over their own heads that did not consume them, so when we sense the fiery Spirit burning in our hearts, we know we will not be consumed but transformed.  We can pray for the grace to undergo whatever change God is calling us to with faith that God is empowering us to grow ever more fully into the risen life of Christ. 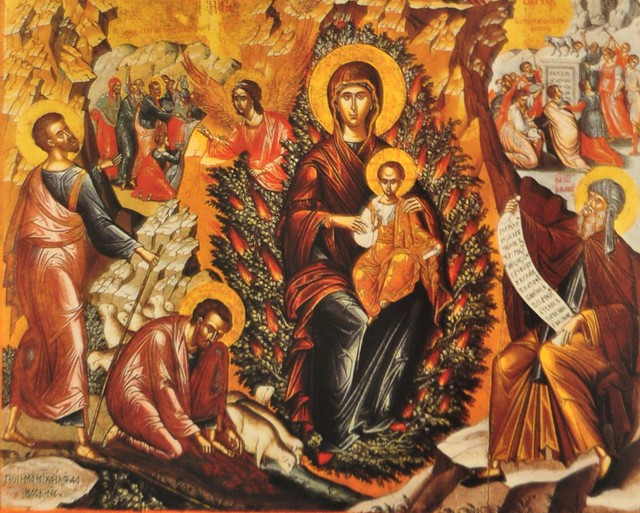 Moses Before the Burning Bush Icon

As St Gregory Palamas said, the whole of creation is one great burning bush, shot through with the energies of God without being consumed. When God spoke to Moses from the burning bush, it wasn’t an isolated event: it was the unveiling for a moment of reality as it really is, all the time. . . . Every situation, every moment,  is a kind of sacrament, wherever we go, whatever we do, it is absolutely filled with God without altering it in any way, just like the burning bush.   – Fr. David Bird, OSB

One Response to “Pentecost, Part III”